I was driving to Oxford for Research Ed: Language brochure on Saturday and was trying to recall when and why I joined Twitter.
I failed.
But at some point in around 2010 I joined Twitter as  teacher – @mrpeel – and a new world opened. At that time, there was a relatively small group of paedagogues online. I read @David Didau (in his @learningspy incarnation) and watched as someone called @oldandrew seemed to disagree with everyone else. I discovered that I could not only follow Geoff Barton, but could occasionally interact with him. Authors such as Patrick Ness and Catherine Johnson welcomed my posts of work completed by my classes – and responded by liking and re-tweeting examples of children’s work, much to the pride of the creators.
Not only that, but I became aware of the growing trend of teachmeets and T&L conferences which were initially publicised through the Twitter forum. And thus begins the journey of last Saturday.  In previous years I had attended Nick Dennis’ wonderful and ground breaking #TLAB conferences in Berkhamsted and realised that we could all take part in discussion and debate around teaching – at this stage I came across Daisy Christodoulou, before Seven Myths was a ‘thing’- and I was stimulated by all I heard – my teaching developed as did my cynicism as a well-intentioned member of SLT led a session on Brain Gym or VAK learning at an interminable September INSET.
Tom Bennett’s brainchild: researchEd seems to me to be a natural progression for my development. I ma quite an old dog and need to view new tricks with care, but this conference and its cousins across the world, offer a chance to engage in thought and exploration of my classroom practice. Often an area in which teachers are happy to use intuition and ‘good ideas’ rather than to engage in study of research, this conference has grown from a recognition that what Bennett called ‘folk teaching’ is not enough. In the last years there have been a raft of outstanding Education books which have made such research easily available for all teachers. The conference is a chance ot bring ideas together and , while networking happily, discuss and develop our teaching practice.
I have heard it said that TeachMeets are like car-boot sales. If this analogy holds, then #rEDlang was like sitting in Christie’s auction rooms with a few thousand quid to spend – not enough to buy everything on offer, but enough to make sensible decisions about the high quality material before taking the plunge and buying.

The menu for the day was huge and my choices seemed ot create a day which created great links and an opportunity ot reflect on ideas highly relevant to my former life before teaching. 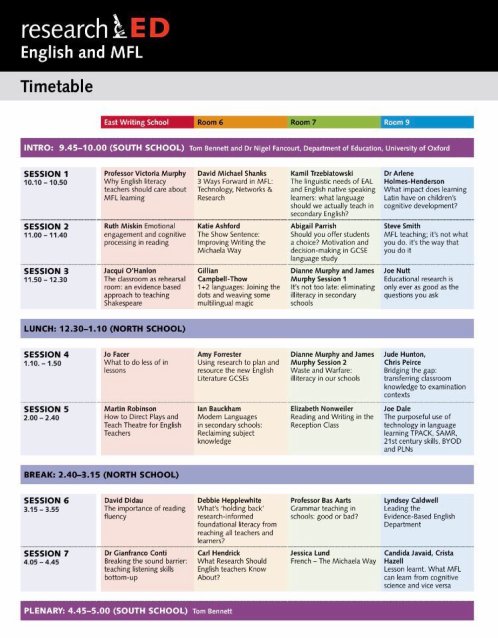 This was a great session in which Robinson – author of Trivium21C, one of the most influential books on teaching I have ever read – exuded passion and enjoyment for his subject.  For me it was also a reminder of the singing days – no sugar paper, but ‘proper acting’. I recall a one hour session on how to use a walking stick to establish character on stage. I was so happy to be translated back 20 years and also to be gaining so much material to store up an use in my current role.
Session 6: David Didau: importance of reading fluency.

One statement caught me at once: reading is taught in primary schools – secondary teachers not necessarily fluent in teaching the ‘how to’ element in reading. David stressed the lack of common agreement about where education research is actually heading before. stressing a key rule:
poor reading skills are not an indicator of poor intelligence. Reading difficulty is an inability to fluently decode. There are a number a number of potential reasons according to  learning and research:
Session 7 considered the Research Informed Teacher: Carl Hendrick…
Head of learning and research at Wellington College.
This was the graveyard shift and it brought much together from the whole day. He raised issues around research : teachers are too often researched rather than researchers. often we are given reponses to unasked questions and these answers are then imposed as policy – learning styles or triple marking were both cited in this area.
There is, he suggests, too big a gap between research and practice. Often research is watered down by the time it gets to schools. Dweck’s growth mindset and Dylan William’s  Assessment for Learning are obvious examples of this. Daisy Christodoulou has recently engaged with A4L in her book  ‘Making Good Progress’. I will not sully her work with paraphrase.
Much research is prey to McNamara fallacy which measures what is easy to measure and ignores all else. This tends to highlight the lack of collective agreement about the direction of education research.
He gave some personal examples of research which has impacted his recent work:

Then it was all over, apart from refreshment and a chance to meet many twitter colleagues in the flesh. I was able to meet several of the @team_english group and what wonderful company they are. This is the latest twitter group of which I am a member – it is invaluable support and a place to share ideas. Not only them, but several people came up to comment about this blog – thank you.  It started as a hobby and has grown. The fact that people find it useful is heartwarming.  We all do the same job, just in different locations and different contexts.
As a result of Saturday 1st April 2017, my friends are not tweachers, they are real people.
LINKS to posts discussed in this article:
David Didau
Martin Robinson
Jo Facer
Carl Hendrick
Katie Ashford
Arlene Holmes-Henderson
Research Ed
Tom Bennett
My top books: current thoughts – these I return to on a regular basis. 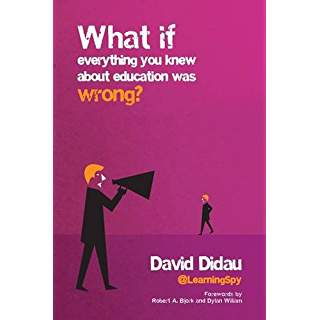 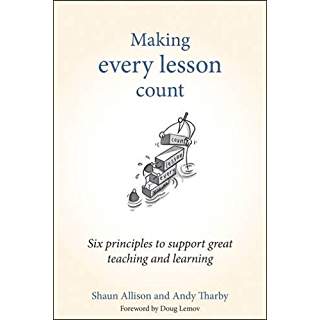