Following a comment by Martin Robinson in his excellent presentation at Research Ed: Language, I am going to engage students with some specific focus on the ‘Beat’ stage direction which appears throughout the text.

Students can be confused by a text which contains both the word ‘pause’ and the word ‘beat’ in stage directions.  We need to explore what the play-write intends by the altogether stronger word.

Robinson was very clear: the BEAT suggests a pause of enough significance to show a shift in the prevailing atmosphere of any scene.  Something is different, in other words, because of the beat. I thought I would look at  a couple of sequences from the beginning of the play and in the lesson, ivite lower 6th boys to focus on 1 or 2 beats and explore the possible shifts. 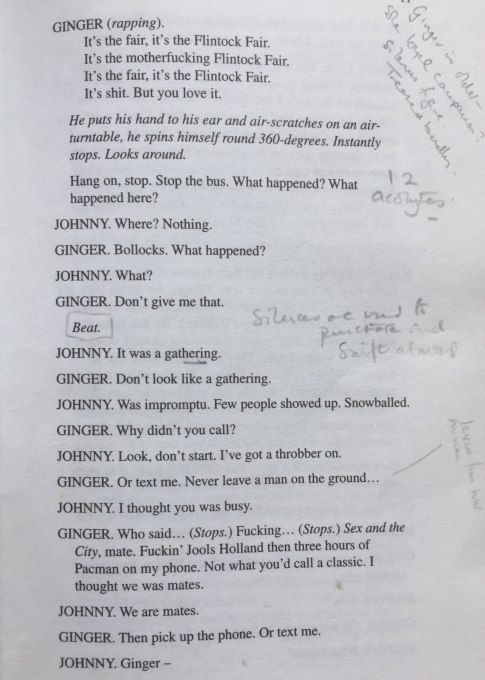 This is the first meeting between Johnny and Ginger, his loyal sidekick. The atmosphere is still light – the previous scene has seen Johnny thwarting the jobsworths from the council imitating a dog -Shep- and generally establishing himself as the Lord of Misrule   – filthy language and spectacular drinking habits.  Ginger enters and asks about the detritus-strewn setting. For the audience this is the next humorous encounter, but after the initial sparring – 4 lines of stichmythia – something alters.  The audience need to notice that Ginger has challenged the veracity of Johnny’s position and that Johnny does not like it.

At this stage not much comes of it, but the line ‘It was a gathering’ must be more significant than a simple exercise in telling the truth: it establishes several things:

He moves on and avoids confrontation by claiming a headache and his intrerrupted ‘Ginger-‘ at the foot of the page suggests something of a backing down and will lead to the Girls Aloud story and the establishing of the ‘sexual prowess’ myth.

A little later in the scene we read 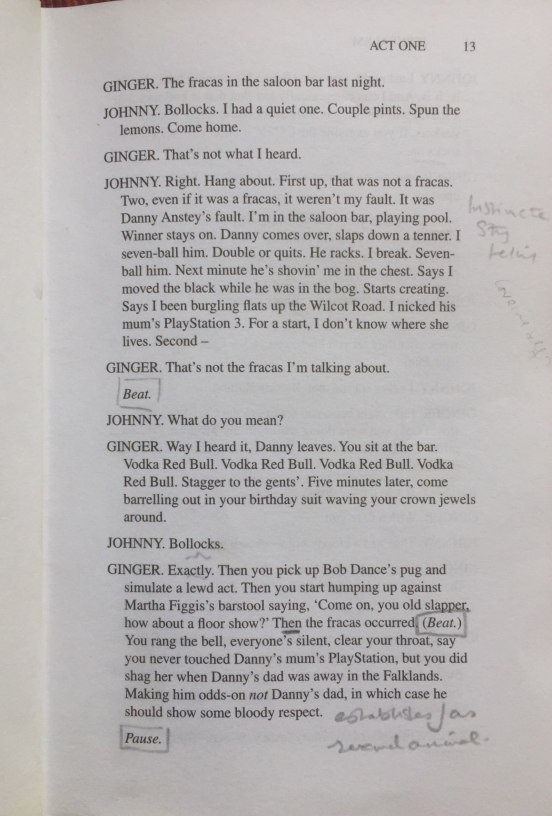 Here the same thing happens again – Johnny is making his excuses and devising stories to aggrandise his behaviour and Ginger challenges him with the bald statement ‘that’s not the fracas I’m talking about’. Once again Johnny is on the back foot and Butterworth wants us to notice this as significant. As the scene moves on, it is Ginger who tells the tale and it is one that does not show Johnny as a ‘Hero’. Half way through there is another ‘beat’. This one establishes the humour of the scene – the ever more hyperbolic stories all leading to the fracas – but also draws attention to another element of Johnny’s character – Johnny as a feral being with the morals and responses not of society but of an animal. This is not just adulterous sex, but it is sex with the wife of a soldier away serving his country. We laugh, but we notice.

In the pair of pages above we read a typically fast-paced passage of stichomyhia ending in the beat as the Professor tries to get Johnny to simply say ‘Ginger’s a DJ’ to keep the peace. The passage has moved quickly with Ginger clearly desperate for Johnny to give him this affirmation.  As the squabble breaks down to childish proportions, so the pace builds and the tension increases.  The beat allows for a pause, but one which has weight. As we turn the page, Johnny remains silent and Ginger: ‘(points to Johnny) You’re a cunt. (points to the professor) You I like.’

This moment, though designed to produce  laughter and signal Ginger’s defeat (Johnny may well have been saving this up after the challenges already discussed), is echoed at the end of the play: ‘Once a cunt, always a cunt’ says Ginger as he leaves the stage. Ginger is Johnny’s only loyal disciple, but here we see him emotionally respond to Johnny’s cruelty and use the taboo language as a weapon, rather as punctuation in banter.  The audience laugh but will also recognise Ginger’s hurt. The second half of the quotation shows him restoring his equilibrium and coming back for more. This is significant and will not happen at the end of the play.